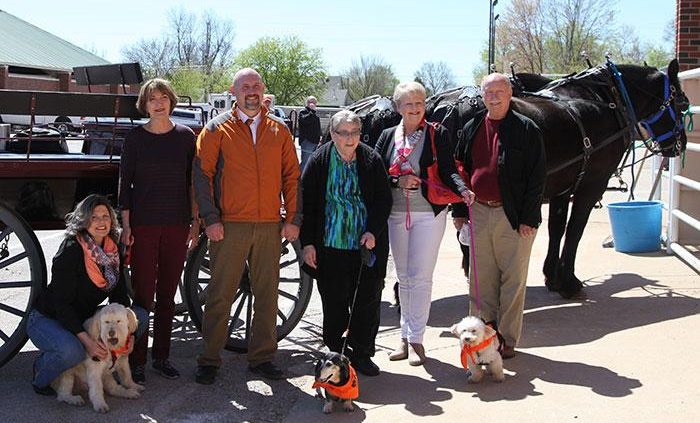 Published with permission from the Oklahoma State University, http://cvhs.okstate.edu/news/pacemaker-posse

Dr. Ryan Baumwart, veterinary cardiologist at OSU’s Veterinary Medical Hospital, created a unique group of canine survivors appropriately named the Pacemaker Posse. Baumwart placed a pacemaker in 23 dogs over the last two years, improving their quality of life and in many cases prolonging their life. In April 2016, all of the pacemaker recipients were invited back to OSU to celebrate the success of the procedure and connect with other Posse members. Baumwart and his team hosted five members of the Pacemaker Posse at OSU’s Center for Veterinary Health Sciences’ Annual Open House. “We thought this would be a great time to celebrate the success of these patients and show others a broader view of veterinary medicine at OSU’s Center for Veterinary Health Sciences,” says Baumwart. “When the veterinary center offers unique services such as this, we maintain our role as the premier specialty veterinary hospital in the state and region,” adds Dr. Chris Ross, interim dean of the veterinary center. “Our faculty have a chance to showcase their skills and knowledge, animal owners have access to lifesaving treatments, and our students are exposed to cutting-edge technologies.”

Patricia Wayman and Abby of Goltry, Okla. “About a year ago, I really noticed that Abby would be moving and then she would just go down,” says Wayman. “I thought, well, she’s tired.” Wayman noticed that it was happening more and more. “It just broke my heart. She would bounce back up but I just didn’t know that one of these days she wouldn’t get back up. I was fortunate enough that my veterinarian, Dr. Carey Bonds (OSU ’03) at Trinity Hospital, told me about Dr. Baumwart. We came over and they ran all the tests.” Dr. Baumwart diagnosed Abby with sick sinus syndrome.

“The sinus node is the normal pacemaker in the heart,” explains Baumwart. “And when that normal pacemaker stops, they don’t have normal blood flow to their brain and they pass out. “We have had dogs that will pass out 20 or 30 times a day. Sick sinus syndrome is probably one of the more common reasons dogs get pacemakers. This happens in people as well. It tends to be the same way in people as in dogs—older pets and older people get this.”

“The decision of what to do?” adds Wayman. “My family is farmers. Abby is not a farm dog; Abby’s my child. So we talked about it and talked about it. Now in the small town that I live in, Abby’s the bionic dog. Everybody talks about, ‘Do you know that we’ve got a dog in Goltry that has a pacemaker?’ I would do it 100 times again.” Abby received her pacemaker in September 2015. She turned 11 in May 2016.

“She’s doing extremely well,” says Wayman. “The quality of life—she’s out chasing rabbits and squirrels in the backyard. She’s got a new lease on life. I tell you Brandy (cardiology veterinary assistant) and Dr. Baumwart they were just wonderful. I highly recommend them.”

Susie Sharp with GiGi of Stillwater, Okla. ”I inherited GiGi from my aunt. I had GiGi a while and suddenly her health was failing,” recalls Sharp. “She was losing weight. She couldn’t keep food down.” Susie’s veterinarian did an exploratory surgery to try to determine what GiGi’s problem was. “My veterinarian called to say GiGi had died on the operating table twice and been brought back twice. She’s not going to come back a third time.” Later the veterinarian called to say that GiGi did in fact survive and she didn’t believe the dog suffered any brain damage. “My vet suggested that we take GiGi to an intensive care unit rapidly either in Edmond or OSU,” says Sharp. “I said OSU.” It was ultimately determined that the muscle that helps her swallow is too weak to function. GiGi’s first pacemaker was an external pacemaker and then it was determined she needed a permanent pacemaker, which was placed by a former cardiologist at OSU. “I didn’t know they did that,” says Sharp. “We still had to deal with her esophagus issue. She was a six-pound dog and was literally starving to death. During one of her checkups, I asked if a feeding tube could be placed in a dog and they said yes.” Gigi’s first feeding tube actually wrapped around the dog’s body. Susie put clothes on Gigi to help hold the tube in place. “Gigi has a little port feeding tube now. She could go without her dress but she’s used to wearing clothes and very uncomfortable without them,” adds Sharp. GiGi was originally diagnosed with a third-degree blockage. Gigi recently had her pacemaker replaced because the battery life was nearly depleted. “We are very grateful to OSU,” says Sharp. “We are grateful we live here in Stillwater. GiGi has had several runs to the ICU—not because of the pacemaker. We have no problems there.”

“Blockages like GiGi’s are another common condition that we treat with pacemakers,” confirms Baumwart. “Rarely do we see the need to treat fast heart rates in dogs with pacemakers.” According to Dr. Baumwart, when there is an atrioventricular blockage this can cause infrequent or no transmission of normal sinus node conduction to the ventricle. “The sinus node is trying to fire but it’s not getting the normal conduction system. There’s a backup pacemaker that’s firing at a very low rate that doesn’t allow the dogs to have a normal blood flow. They may cause dogs to pass out because of this as well,” explains Baumwart. Human pacemakers are used in dogs. The device is about the size of a silver dollar. The pacemaker carries the computer and battery inside of it. The lead plugs into the generator and the other end of the lead is placed inside of the dog’s heart.

“There are two different types of leads: a passive fixation and an active fixation which actually screws into the muscle of the heart,” says Baumwart. “We put those in using a specialized x-ray called a fluoroscopy. It allows us to look at a live image as we put the lead inside of the heart. Once it is secured, we place the generator underneath the skin in the neck of the dog. Sometimes you can feel the generator and sometimes you can’t.

According to Baumwart, the biggest barrier with pacemaker surgeries is the cost of the surgery.

“We recently started using a company that provides animal pacemakers at a much reduced cost compared to the human pacemakers,” he says. “However, this can still be a large amount of money for the average pet owner.

“The other nice thing about pacemakers, and some people don’t know this, is that we can use a computer to adjust those settings,” adds Baumwart. “A ‘wand’ talks to the pacemaker via a magnet. We can actually interrogate it and look and see what things have happened over the period of time since we last saw the patient, say over the last six months. Were there periods of time where the pacemaker was having trouble? We can do some tests with it. We can also re-set the heartrate to go a little lower or higher if they are having trouble with it. This technology has made life a lot easier making it possible to adjust the pacemaker without pulling it.”

Gaining training in specialties such as cardiology takes several years of work and study. “Our students can graduate with an awareness of the presence and possibilities in cutting-edge treatments at the veterinary center,” adds Ross. “Some may also decide that they would like to pursue a career in specialties like veterinary cardiology.”

“It was great to see everyone together and sharing stories about their pets,” says Baumwart. “I am truly blessed to have a job that I can help amazing people and their amazing pets.”

If you would like to support the veterinary cardiology unit at OSU’s Veterinary Medical Hospital, contact Heidi Griswold at hgriswold@osugiving.com or 405-385-5656.

Pictured (above) left to right are: Brandy Hutchings, veterinary assistant, with Percy, owned by Rebecca Dees, Dr. Ryan Baumwart, Mary Jo Wipperfurth with Snoopy and Susie and Kenneth Sharp with Gigi. Also attending but not pictured were Patricia Wayman with Abby and Maureen Cancienne with Sassy.

CAUTION: Federal law (U.S.A.) restricts our products to sale by, or on the order of, a veterinarian (or properly licensed practitioner).
All Dextronix products are for veterinary use only – not for human use.

Our pacemakers in the news